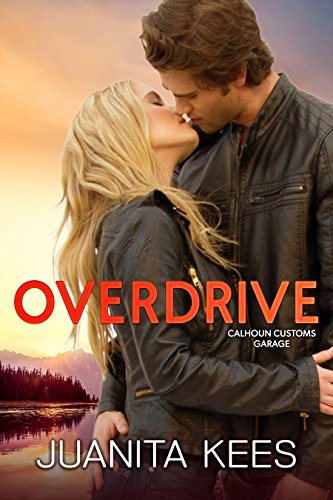 Chase Calhoun and his family run Calhoun Customs Garage, where their retired NASCAR driver father started. His father, Marty was just diagnosed with Parkinson’s disease thus far only Marty’s hands are shaking but that enough that they garage needs to hire a graphic artist for his father to mentor. Chase never expected the girl with a baby to be the one they hire especially after finding her and her three month old baby, Zoe hiding in the attic of the garage–a place that he has rarely gone since his mother’s death.
Charlotte Jackson is used to garages and fast cars since her father and brother are both NASCAR drivers. But unlike her brother, Charlie must follow her father’s orders that means giving her beautiful daughter up for adoption. Something that she’s not willing to do–so she runs away with her baby. Her original plans fell through so she went to the infamous Calhoun Custom Garage knowing that they are looking for a graphic artist–something she is passionate about but her father doesn’t allow her to do.  Charlie is also running from the PI her father hired her to bring her home. Tony Jackson is never told no. He is a sore loser.
Chase brings Charlie into the family fold and Marty mentors her. The Calhoun family also assist Charlie with standing up to her father. Her brother, Ronan is also finally able to break free of Tony’s command.