Skip to content
I did have a few issues with this novel. Overall, it wasn’t too bad. I’m not sure I would recommend it unless I know the person really likes Disney or is into erotica–there really isn’t too much sex in it now that I think about it. 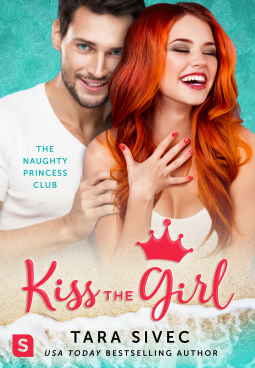 This is Book three of The Naughty Princess Club. I felt that I needed to go back and read the first two book before this one since I spent the entire first two chapters completely lost. I struggled with figuring out the characters and their roles within the novel. The overly used Disney princess theme was overkill. All the characters in the series are characters from Cinderella, Beauty and the Beast, and Little Mermaid. Kiss the Girl is a spiff off of Little Mermaid. The main character is a sassy, attitudal Ariel who has self confidence issues due to her verbally abusive ex-husband, Sebastian. With the help of her friends, Belle and Cindy, Ariel is creating the Naughty Princess Club where a client can order a stripper for a home show. Ariel is the only one of the three who has yet to schedule a show or step foot on Charming’s Gentlemen Club stage.
Eric knew from the moment he met Ariel that she was perfect for him. He wanted to spend the rest of his life with this sassy redhead with a mouth that would put a sailor to shame. Eric Sailor knows the sailor he would like her to shame–too bad Ariel doesn’t have any of her self-confidence. Eric is going to help her with that. She is too precious and gorgeous not to. He doesn’t show her with compliments instead he yells at her when she’s in the midst of getting evicted from her foreclosed home with all her precious antiques. He doesn’t put up with her crap either. He gives it as good as she dishes it.
Ariel met her match when Eric’s mother, Ursula asks to meet. Ursula, who is the head of the business council and personally told Ariel that her business license was denied. Ursula also invited Vanessa, Eric’s childhood friend who Ursula wanted to be Eric’s wife–Vanessa also resembles Ariel.
But the cliches don’t stop here–Cindy’s daughter Anastasia records Ariel’s meltdown on Snapchat. Cindy’s boyfriend, PJ (Princeton James Charming) helps pick the three girls up after Ariel’s meltdown after breaking up with Eric the day after the lunch with Ursula.
Oh and Eric’s family owns a yacht business–Eric loves boats. The story had a bit too much Disney in it for me especially since the three women have a stripping business. Back to the storyline. Eric does slowly bring Ariel’s confidence back so much so that she is able to confront not only her ex–but also Ursula.