Skip to content
This husband and wife writing duo made me laugh. A few things within the story seemed a bit unrealistic but I suspended belief for the sake of the story which I’m glad that I did. 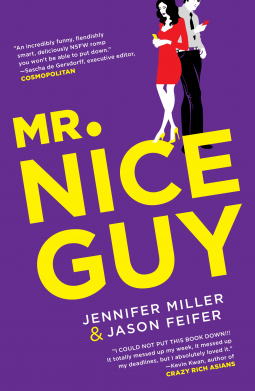 Lucas Callahan left his small town existence and carefully plotted life for the Big Apple as a fact-finder for Empire magazine. Lucas didn’t let the entry level job deter him from his dream of becoming a journalist–even if he has zero writing experience. He’s especially feeling confident after having a one-night stand with Carmen Kelly–Empire’s resident sex columnist. At the time Lucas thought she was just an gorgeous New York woman who wanted him. Carmen blasts their one-night stand and Lucas in her column. Lucas responds with a letter signed Mr. Nice Guy. The rivalry begins.
Carmen’s editor and Lucas’ boss, Jays tells them that they will continue their sexual relationship and write about it in the column. At first, Carmen rips Lucas every chance she gets while Lucas does the exact opposite. He tells her a few shortcomings but mostly he flatters her. But Lucas is also being sucked into Jays web and can Lucas survive a cut-throat manipulative world where Jays calls the shots? Carmen has decided to leave Empire and get away from her editor and ex-lover. She tries to warn Lucas about Jays and how he operates. Is Carmen’s warning too late? Can Lucas survive the New York life? What happens if Carmen or Lucas fall in love with each other?