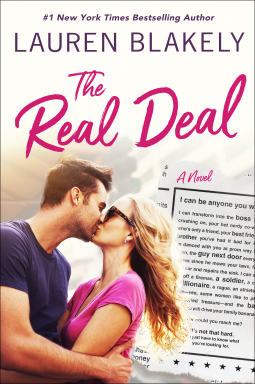 Lauren Blakely
April Hamilton needs a buffer for the annual Hamilton-Moore Family Reunion. Every time, April comes home, someone from her family sets her up on a blind date trying to lure her back home to Wistful, a small town community on the edge of Long Island Sound. Everyone knows everyone. But April loves her job as a body painter. She makes a comfortable living working on commercials, magazines, and movies. April is one of the best. Why would she want to leave New York City for the humdrum of small town living where she would be limited to face painting at the ice cream social. What’s a girl to do? She bribes her gay best friend to pretend to be her boyfriend. But Xavier is a male model who gets a last minute modeling gig–two days before the reunion. Xavier doesn’t leave her in a complete bind. His neighbor is a bartender with a side gig–boyfriend for hire.
Theo Banks is not the boy next door, but he can be if need be–for a price. His Craigslist ad lists a number of things that he can do. All of it is completely platonic. No, kissing which has never been a problem…well until April. The moment he meets her. He wants to throw all his rules out the window. He has to remain focused. He needs to pay off his brother’s debts to ensure that Heath stays on the straight and narrow. Heath needs and deserves a second chance after spending the last two years in prison for fraud and bond scams. Theo hasn’t always been a boy scout either. Both brothers have had to hustle their way through college. Life hasn’t been kind to either of them. That’s another reminder to Theo to keep his business deal with April completely professional. But the more time April and Theo spend together the more both of them develop true feelings for each other. How can they survive with so many lies and other people in their path?
This book is availble today!!
https://www.amazon.com/Real-Deal-Lauren-Blakely-ebook/dp/B0763T1396