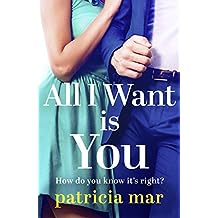 Mar puts a different spin on this romantic novel–the story of Sara De Michele and Daniel Gant isn’t the beginning of their love story but the middle. How couple need compromise and trust to grow as a couple. The storyline was not what  I expected. My expectations were of the couple runs into a few hiccups–they break up and get back together. Instead Sara and Daniel are madly in love with each other. The conflict of the story is they are so madly in love that it blinds them and feeds their insecurities especially for Sara since Daniel is a highly sought after male model with the media and Hollywood knocking on his door.
Another surprise for the reader is Daniel is just as much if not more insecure about himself and his relationship as Sarah is. His cousin enters the scene at the height of Daniel’s insecurities and when Daniel has to leave for a meeting in Hollywood. The media adds to both Sara and Daniel’s insecurities when Daniel is photographed at a party with a Hollywood actress. Of course, the quirky sister and best friend also assist the duo with finding their true passion and reminding both Sara and Daniel what they each want–each other.