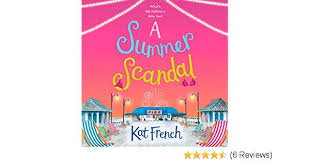 Violet has a safe stable life, living with her parents, beside her Grandpa Henry, and dating reliable Simon. Violet feels stiffled. She doesn’t realize how stiffling her life was until after her grandfather passed away and willed Violet a pier and a condo. Yes, an entire pier at a small town ocean town two hours away in Swallow Beach. On the day of her grandfather’s will reading, Simon proposes. He states that he will wait for her after she tells him that she’s going to live at Swallow Beach for the summer.
Violet feels a pull to her dead grandmother, Monica who died when Violet’s mother Della was a small child. The more Violet spends in her grandparent’s Lido condo the more Violent feels connected to the women she’s never met. To top it all off, Violet looks almost exactly like Monica.
Her grandfather’s condo is located in a building called the Lido. She immediately befriends Barty and his granddaughter Keris both of who live in the groundfloor. Cal, the blue-eyed leathermaker who takes her breath away. Violet tries to stay away from Cal and the pull of attraction he has on her. The friendly exchanges of number and neighborly dinner only instensifies her attraction to him.
Cal’s mother, Lady Mayoress is doing everything in her power to gain control over the pier from Violet. Lady Mayoress, Gladys is looking out for the town and her only son. She wants to ensure that the pier re-opening is in the best interest of the town. At the moment, Gladys isn’t so sure since Violet has decided to re-open the pier that sells various forms of sex toys. She believes that this will attract unsavory people.
Cal knows what’s best for him. For years, he thought that was his first love Ursula. She left him to become an American model. The more time he spends with Violet, the more he’s falling for her. He doesn’t realize how much he loves her until it’s almost too late when a fire breaks out on the pier with over a hundred people on it.