A Change of Pace

Freya Barker
Newt Tobias would do anything for his little girl–even retire early from the force and move to a small lake community to give Millie a new beginning after her mother’s  tragic cancer loss. Millie is also a cutter due to her lack of control over elements in her life–mother’s death, moving in with her dad, dad being shot, and being a teen. After meeting Freddy and her dog, Boulder at school–Millie begins to develop a relationship with Freddy. 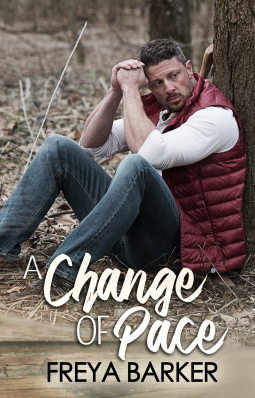 Freddy uses animals to connect with her patients. Freddy’s therapy style is a bit unorthodox, but filled with results. Freddy knows she shouldn’t invite patients to her home–she knows that Millie will come out of her shell around the numerous animals on her land. An afternoon with Freddy’s animals and Millie slowly starts coming out of her shell and talking about the first time she cut–after Newt was shot. Millie isn’t the only person that Freddy is getting too close to. The more she’s around Newt, more she’s drawn to the man as more than a patient’s father. Soon life changes pace for everyone from Freddy’s cancer scare to Millie’s kidnapping. Neither Newt or Freddy leave each other’s side during the changes in their lives instead it pulls them closer to each other. But what happens when Millie wants to make them one family in one house instead of two?