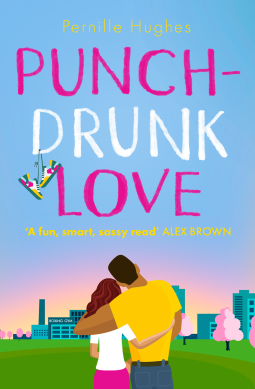 This novel is hilarious! I laughed so hard that I cried. It reminded me of a Sofia Kinella or Marian Keyes novel. Anything that can go wrong did. Tiffanie Trent is having a rough week–her boyfriend of ten years dumps on their anniversary at the same restaurant that they had their first date and since they lived together at his place–she’s now homeless. Tiff has more bad news–her longtime friend and father figure, Frank Blackie dies. Frank was her first bookkeeping client and was a prominent figure throughout her life. To add the icing to her crap-tastic cake–her childhood boyfriend and first love Mike “The Assassin” Fellner returned for Blackie’s funeral looking more gorgeous than ever while Tiff has gained a few pounds and feels worse about herself than ever.
At the will reading, Tiff finds out that Blackie has left his most precious gift to her–his boxing gym. Blackie’s assistant coach, Ron makes numerous sexist remarks that Tiff isn’t cut out to run the gym since she’s a woman–and making a remark about her weight. Her ex-boyfriend Gavin tries to talk her into selling it because he think she doesn’t have the motivation or business sense to run a business with employees. Tiff is determined to prove them both wrong. With the help of her best friend, Shelby and Natalie, a Blackie customer’s wife–the three are determined to upgrade the gym into a full service experience for all genders. Tiff runs into some trouble beginning with the fact that she is secretly living in one of the gym’s storage rooms. She is also receiving haunting crack calls, mail with dog poo, and the gym is vandalized. Oh and Blackie’s ex-wife and step-son feel that they should have been given the gym. The more Tiff works on the gym the more she comes in contact with Mikey. Mikey keeps coming back to the gym for nostalga or so he says. All of her old feelings for Mikey are starting to resurface especially after the spend the night together. But Mikey is offered a job in LA–a once in a lifetime opportunity. Tiff doesn’t want to get in his way. Gavin has returned when he sees that Tiff is turning things around with the gym. What will Tiff do? Will Mike take the offer or move back home?