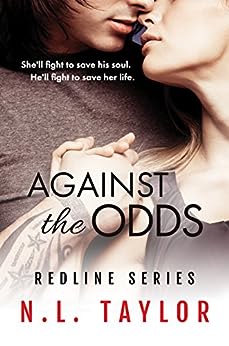 Against the Odds: Redline Series

Jake Masercotti is a broken man. His mother committed suicide when he was 12 and his little brother is still in foster care. Yet thanks to Jake’s bad choices is unable to gain custody of his brother, Dario. At 21, he is still mourning her death. When he was a teen, he used to spend every Sunday at her gravesite mourning her death. Every Sunday, a blonde angel was doing the same. They both felt alone in their anguish but hearing the other gave them both comfort that someone knows how the other feels. Ironically, both keep a journal about their suffering and mourning. Jake works for Tiger’s Den, automotive shop that Sean owns. Jake is Sean’s best mechanic even though cars are not his true passion. Photography and art is but that won’t pay the bills or help him get custody of his brother. Jake helps out his best friend Johnny by looking at a Mustang when he sees his “angel” at the gas station driving a Sunbeam Tiger. He is determined to find her. His life has been a wreck since he lost his journal in the cemetery and losing his “angel.”

Nikki Elliot lost both of her parents. She was lucky that a family friend–Sean took her and her older brothers in instead of going into the system. She was able to continue her racing career that she and her father started when she was 5. But now her mentor, coach, and greatest fan is gone. The only thing she has left of him is his Sunbeam Tiger and her racing. Both of which are put to the test after a horrible crash at Le Mans. Nikki crashed her own Tiger during that race and she lost part of her short term memory. She cannot remember the days leading up to the race or the after the race which is bothersome for her since every racer learns from every race.
Nikki’s racing career is hanging on by a thread. Her older brothers own their parents’ auto body shop and occasionally assist her with her racing team. But she’s running out of money and sponsors. Her friend and ex-boyfriend Damon who has Mafia connections tries to encourage Nikki to quit racing. He is also still in love with her. But other forces keep them apart. Damon is scared that Nikki will eventually regain her lost memories. What will happen to her if she does?  Will Jake find Nikki? Who will Nikki be with at the end? Will she find her sponsorship to return to the professional circuit?