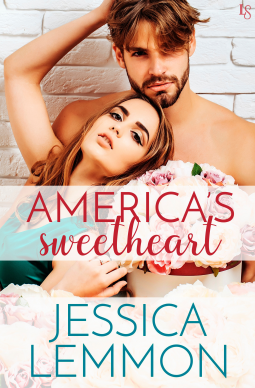 I received this ARC through NetGalley. It is a sweet second chance romance. I had a few laughs while reading Allison and Jackson’s story.

Jackson was a college football player at Ohio State until he was injured since he could no longer play he had to drop out of college. But that was all after he college sweetheart left for the summer to pursue acting. She was only supposed to be in Hollywood for the summer. The plan was for her to return and they would finish their degrees together. Plans never pan out especially for Jackson. Allison was only on set as an extra for a day before she was offered the lead role in a television series: America’s Sweetheart. He tried to make their long distance relationship work…really. He’s a small town kind of guy. He grew up in Columbus, Ohio. What did he know about living in La-La land? During his one and only trip to see Allie, he left after only a few days…ok a day. She asked him to move in with her. What’s a guy to do? He went home and wallowed after returning to Columbus and working for his father’s construction business. Now, Allison is Nina Lockheart the star of America’s Sweetheart and dating her co-star Xavier McCormack.

Why did I let my manager talk me into dating McCormack? What a jerk! I went from America’s Sweetheart to the most hated person in Hollywood. All because of that two-faced ex. I can’t escape the media. So, I go to the only place where I can be me. No, not Nina Lockheart–but Allison. The girl from Columbus, Ohio. The first thing I see is Jackson Burke. Great! When I thought my life couldn’t get worse, the one man who shattered my heart is standing in my parents’ living room. He is remodeling my parents’ bedroom while they are on a month long trip to Europe. Terrific. The more time, I spend with Jax the more I remember how it felt to be in his arms. The more I want that again.

Thanks to a fan snipping a picture of Jax and I grabbing lunch, my manager wants us to “date.” I’m not sure this is a great idea. I need the positive publicity, but can my heart survive Jackson Burke again? Why would he agree to this? Does he still have feelings for me as I do him? Do I really care if he has the ability to shred me to bits? He is all I ever think about. I’m disappointed when he finishes his job at my parents; I won’t see him every day. I’m heartbroken at the mention of returning to Hollywood. What will happen to my heart if my manager arranges a reconciliation with McCormack?