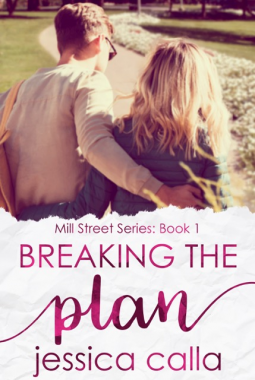 I look forward to reading the rest of the books in this series. I love love love Oliver. I also have a slight weakness for those nerdy hotties too.

Oliver, he has a plan. A plan for his entire future. He wrote this plan in high school and has made a few alterations to the plan–the basics remain the same. Go to college. Go to law school. Marry Violet. Make partner at his family’s law firm. Violet breaking up with him was not part of the plan nor was her spending the majority of the semester abroad. Since Oliver loves plans so much he made another one. One to get Violet back. Win her heart back. Convince her to give him another chance. For this plan to work, he need help from a very unlikely source–Taryn, Violet’s roommate. Taryn and Oliver have never seen eye to eye. They barely tolerate each other.

Taryn is struggling with finishing up her studies. It doesn’t help that she’s finishing a degree she doesn’t even want–Communications. But she’s less than a year away from finishing. To make things worse, her best friend in the world leaves for six weeks for study abroad. And she feels sorry for nerdilicious and decides the help the poor sap win Vi back even if Taryn thinks the two are not right for each other. Vi needs to spread her wings. Nerdilicious just needs to chill more. So in return for helping him with Vi, Oliver will help her with this stupid communications paper. Taryn gets more than she bargained for. In a matter of weeks, she goes from missing her beloved roommate to not wanting Vi to return. What will happen when Vi does return? Will Oliver go running back to her? Of course, he will. He made a plan in freaking high school. She can’t let him abandon all his plans for a few days rolling around in bed together. But she also can’t watch Vi with Oliver either. What will she do?

Oliver Stoneridge loves order and plans, especially when they’re laid out on a perfectly formatted spreadsheet. But when his girlfriend, Violet, dumps him, Oliver’s strategy for the future slips away. Desperate to win her back, he begs Taryn, his archenemy and Violet’s beauty queen roommate, for help. Taryn’s gorgeous, thinks he’s a nerd, and wouldn’t know a plan from a prom dress, but Oliver soon finds himself tangled in her web of sexy. Suddenly, Ollie’s falling for Taryn and losing track of everything he thought he wanted.

Taryn Markos knows that agreeing to help Ollie win back her best friend is a dumb idea. Not only because he’s all wrong for Violet but because the more time she spends with him, the more confused she gets. Who knew Nerdilicious himself could challenge her with a single look, even from underneath those unruly eyebrows in dire need of a tweeze? How could she have known that he would accept her and defend her when she needed it the most? Taryn’s hated Oliver for three years. Why does the sight of him now make her come alive?

As things heat up between the frenemies, sparks begin to fly. But Ollie and Taryn know their love-hate flirtationship has to stop—before someone ends up with a broken heart.